Once you have considered how your Video for Change initiative will create change, the next consideration is to understand who is involved in the issue.

People involved include those:

The following methods and activities build on the methods in Step 1 (Statement of Intent) and Step 2 (Theory of Change).

By immersing yourself within groups of people or communities, you’re better able to observe and learn from their practices. Without spending considerable time with a community, you run the risk of making false assumptions about people’s priorities, needs and rituals. If you’re already a community member, this method can help you reflect on how your own community functions.

Spectrum of stakeholders and potential partners

To develop an effective strategy, it’s useful to identify the positions of institutions, organisations, groups and networks that already work on or influence this issue.

To do this, begin with your “Why?” statement from Step 1 where you defined how the initiative will contribute to positive social change. Now rephrase this into a position statement. For example: “We believe we should have balanced gender representation in our Parliament.”

Next, draw a half-circle, divided into five wedges, including the following:

The result is a spectrum of stakeholders that you can use to help design your Video for Change initiative. On the left side of the spectrum, write in the institutions, organisations, groups and networks who you believe most support your position. On the right, write in those who you believe oppose you.

After you have placed all stakeholders on a spectrum, you now need to consider where opponents and allies (existing or potential) are situated in terms of their influence. Identify actors who have the most influence on your issue or your initiative.

Use the below diagram to put stakeholders on an axis showing their influence and level of support. You may need to do more research in order to do this effectively. 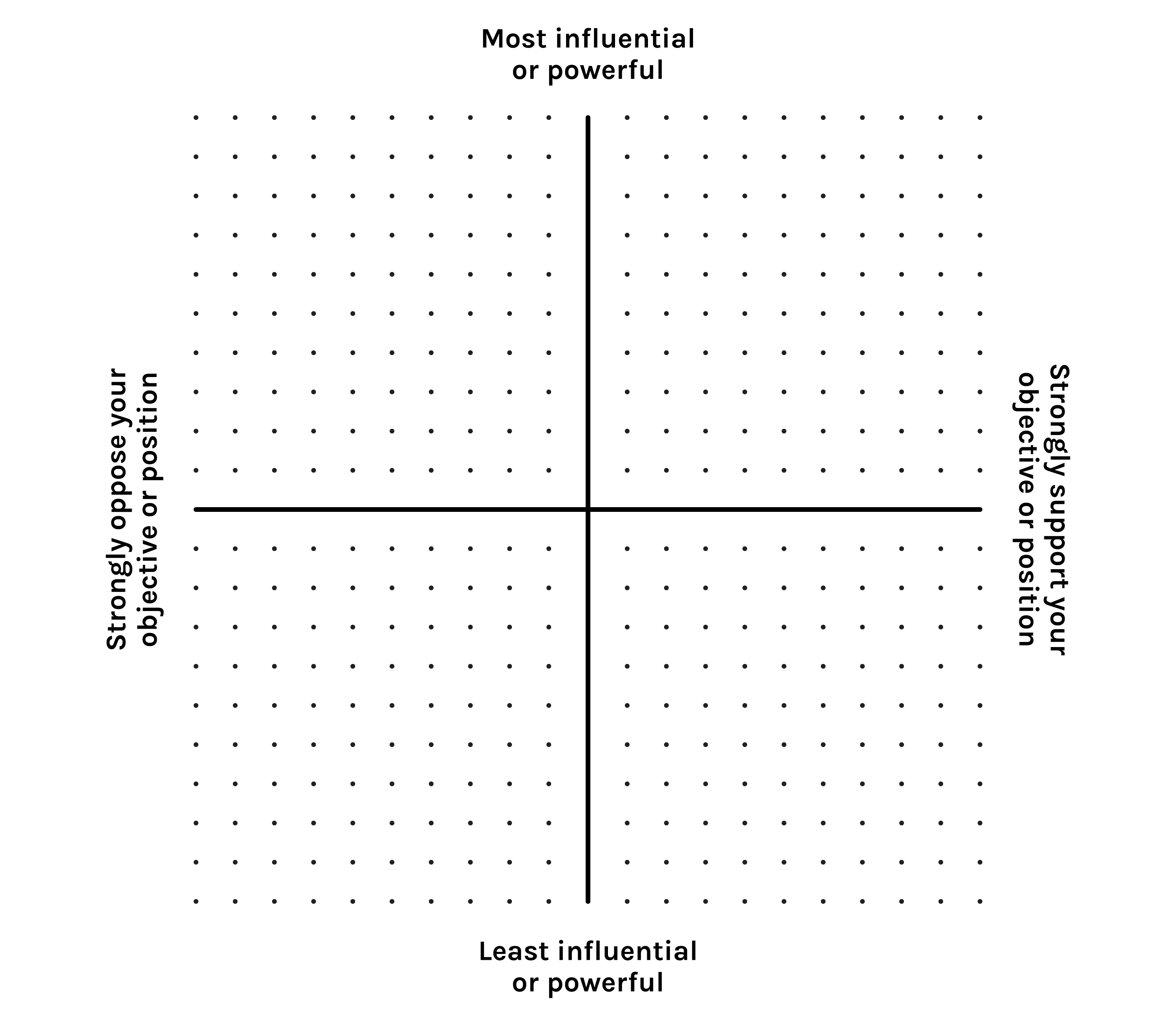 Now, use both your spectrum of stakeholders overview and the influence mapping to decide:

Beyond identifying key stakeholder networks, organisations, groups and institutions, it’s also important to find a way to better understand and know your target audience(s). Audience segmentation is not a perfect tool, but it can help you design more effective communication and outreach efforts, because it allows you to understand how different groups are likely to respond.

Your target audiences may include those people directly capable of making the change you’d like to see, but it will also include groups of people you want to engage during your initiative.

The most common ways to segment audiences include:

By identifying these things, you can divide your target audiences into segments. This allows you to better set up strategic targeted communications that are useful to them and serves their needs and interests, as well as helping them take the actions best suited to their situations.

It may also allow you to look across each segment and analyse those conditions or situations that each segment has in common and unites them, allowing you to coordinate collective action across various segments of your audiences. This can help seed interesting collaborations and dialogues that otherwise may not have occurred.

Finally, a deeper analysis of your audiences — especially the platforms they use — will also allow you to start the process of thinking about how you will reach audiences and engage them in your initiative.