Video for Change initiatives contribute to a number of different types of social change.

The above framework is adapted from Doc Society’s Impact Dynamics, Tanya Notley, Lina Srivastava and the Video for Change Toolkit team.

This impact story about the Poor People’s Campaign in the USA is an example of how video can be used to build and support a social movement.

Video and building a movement: Discover how video provides information, offers education and brings people together as it supports the Poor People’s Campaign in their fight for a moral revival in the USA.

Initiated by: Repairers of the Breach and Kairos Center for Religions, Rights, and Social Justice. Within each state, the campaign is self-organized.

Problem: The negative effects of the interlocking evils of systemic racism, poverty, ecological devastation, militarism and the war economy, and the distorted moral narrative of religious nationalism in America on its people.

Goal of the videos: Support and build the overall movement through videos that educate and document.

Obtained Impact: Ongoing campaign support, awareness-raising that poverty is systemic and not the fault of individuals, increased capacity of Campaign members to use cameras and produce audio-visual material in support of the campaign.

Methodology: Constant production of short videos, combined with live events, gatherings, demonstrations and publications. Videos are screened and used to educate and document.

Budget: none, all volunteer.

Duration of the video: Short form videos, ranging from 2 minutes up to 30 minutes.

Duration of the project: Still ongoing.

The Poor People’s Campaign is a broad movement for the poor and affected communities in the United States of America. It tries to unite all those whose lives are negatively influenced by the effects of the interlocking evils of systemic racism, poverty, ecological devastation, militarism (America’s war economy) and the distorted moral narrative of religious nationalism in America. The roots of this movement go back to Rev. Dr. Martin Luther King Jr, whom, at the latter stages of his life, called for a ‘revolution of values.’ The Poor People’s campaign tries to reawaken this revolution. The campaign focuses on human rights and uses only non-violent protest strategies. 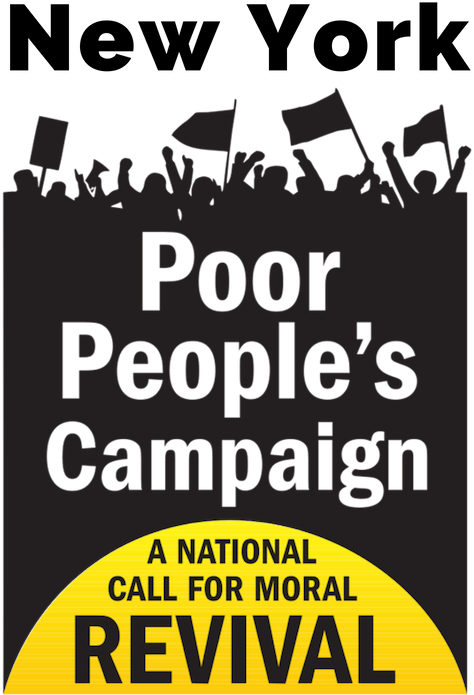 Things started in the Spring of 2018 with 40 days of civil disobedience. Every week campaigners were letting themselves get arrested for blocking streets and holding sit-ins. A volunteer team of videographers documented the events and prepared social media cuts. The civil disobedience would happen each Monday. On Tuesday and Wednesday, footage was edited, and on Thursday, the videos would go online using mainstream social media (Facebook, Instagram, Youtube, Twitter).

The New York State Poor People’s Campaign, the subject of this impact story, focused its distribution of these social media clips within its own state. The main purpose of these videos, at the start of the campaign, was to raise attention and rally (more) people for the next Monday’s civil disobedience. 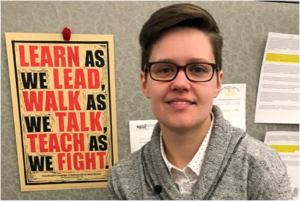 “We are building something that can force changes at the State level and of course be part of a national movement that can force things to happen beyond New York.” ~Rev. Emily McNeill, Co-Chair NYC Poor People’s Campaign.

Filmmaker Peter Kinoy, with the support of Skylight Engagement and volunteers from Hunter College, produced the 30-minute Empire State Rumbling, which documents the start of the Poor People’s Campaign through the eyes of four powerful women involved. We learn about the goals of the campaign and meet an open fusion movement aimed at uniting all different types of people.

Empire State Rumbling has been used to rally support, document the campaign, raise funds, and educate people. Campaign meetings are organized around screenings of the video, and a bus tour further helped promote the campaign. Post-screening discussions brought people together to discuss the various issues the campaign is addressing.

“The thing that’s most critical, is combining education with action. The impact lies in highlighting the idea that people, individually, are not to blame for their own poverty. We now have a situation where people start to understand their oppression, as a worker, a black person, a woman, etc. This can lead to identity politics, where one oppression is deemed more important than another, but in the 1st year of the Poor People’s Campaign we listened to everyone. Now there are 9 active organizing committees in regions throughout New York State.” ~Peter Kinoy, Filmmaker

Currently, under the working title Empire State Awakening, people are being trained to use video in an effort to help them tell their own stories. The visual storytelling that comes forth offers a portrait of the current political struggle within New York state and documents the current state of the Poor People’s campaign in New York State. Going public with stories of oppression under the Poor People’s campaign offers an opportunity for communities to better understand the political significance of their stories.

An example of a project within Empire State Awakening is this 10 minute video about the Shinnecock people of Long Island, an indigenous group whose traditions and land are threatened by capitalist forces. While this particular video is enjoyable to watch, the quality of the media output at the start of the campaign has, in general, not been good enough. In part because all videos are made by volunteers, without any budget. But more so, the campaign learned that having access to a camera and a platform for publication doesn’t automatically mean people are able to produce watchable and meaningful content. As involved filmmaker Peter Kinoy puts it: 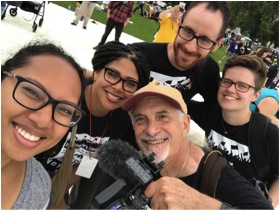 Everybody knows how to use social media, everyone seems advanced in that. Very few understand the more sophisticated, multi-layered use of video. At the moment it’s mostly cell-phone work and results are not always watchable. There’s no access or training for more sophisticated treatment. That’s why we started to provide education.”

At the moment, active organizing committees within New York State can put in requests for training if they are already using video. The training centers around problems of visual storytelling. The aim is to help campaigners publish better audio-visual material, build their capacity to use media, and ultimately become better (visual) storytellers.

According to Peter Kinoy, the development of a people’s media must always go hand in hand with any political movement. “And it works vice versa as well; you can’t develop a strong movement without a strong independent people’s media along with it.”

Today, video plays an important role within the production of independent people’s media content; it might even be its most important role. Activism can no longer let media production be an afterthought. Holding a rally or organizing a demonstration while treating the documentation of it like ‘let’s all not forget to take pictures,’ is no longer acceptable. The use of media has to be part of the organizing, part of the campaign. The people responsible for documentation need to be an integral part of the campaign.

“Breaking the old habits of media as an after-thought is hard. But after 2 years, the New York State Campaign has endorsed a state-wide education/documentation project called Empire State Awakening” ~Peter Kinoy, Filmmaker. 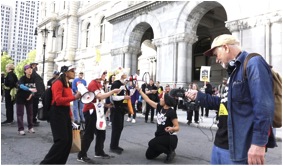 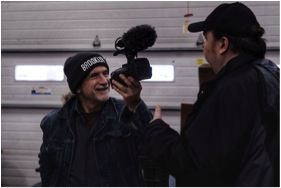 Webinar on Video for Change and Impact, which we organised with New Tactics.
Video for Change Impact Evaluation Scoping Study: A Summary of Key Research Findings by Tanya Notley